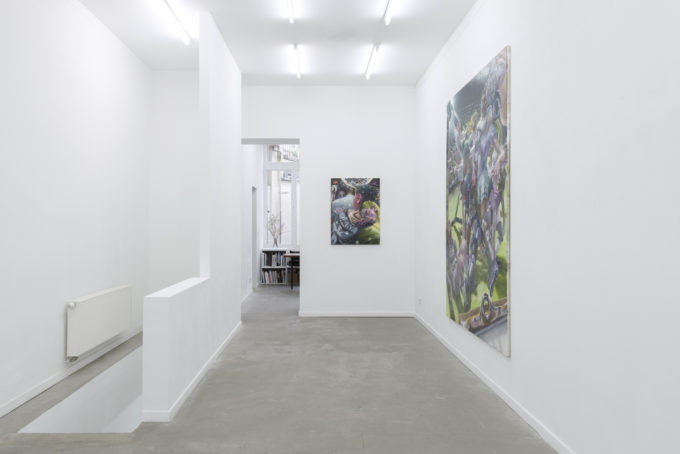 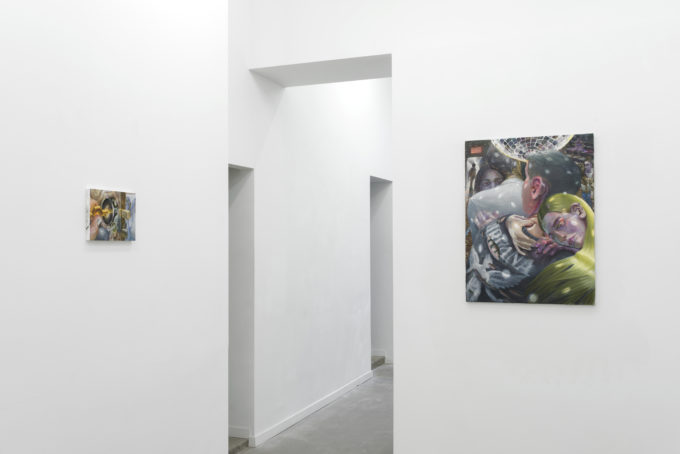 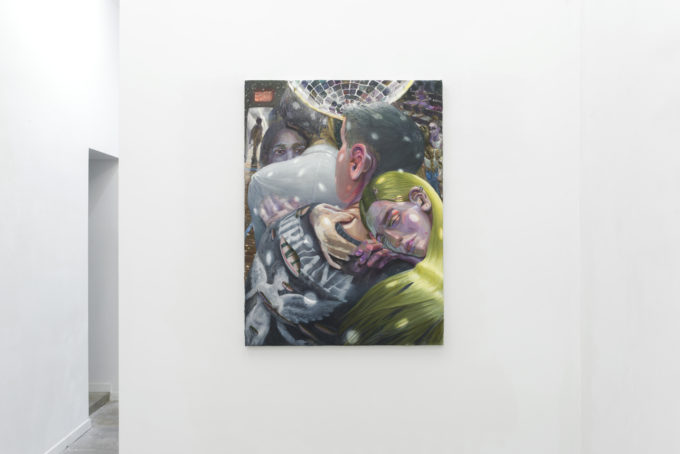 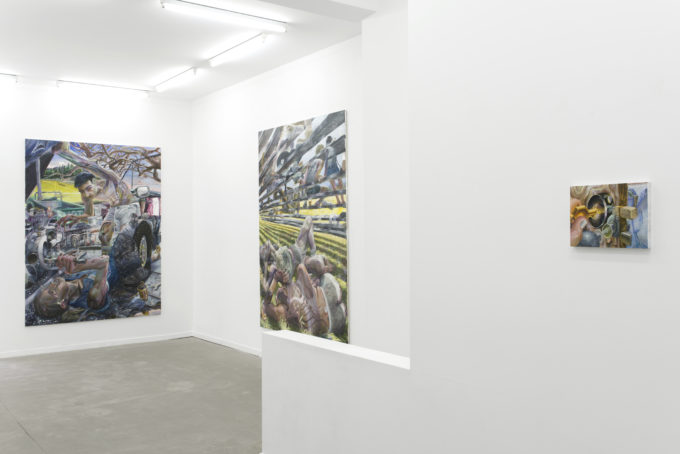 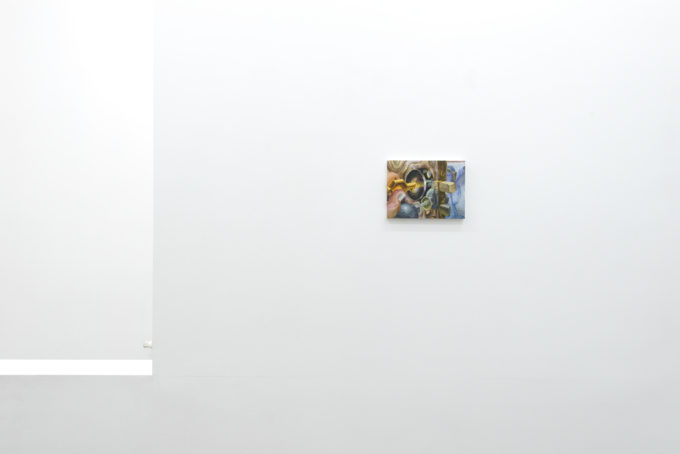 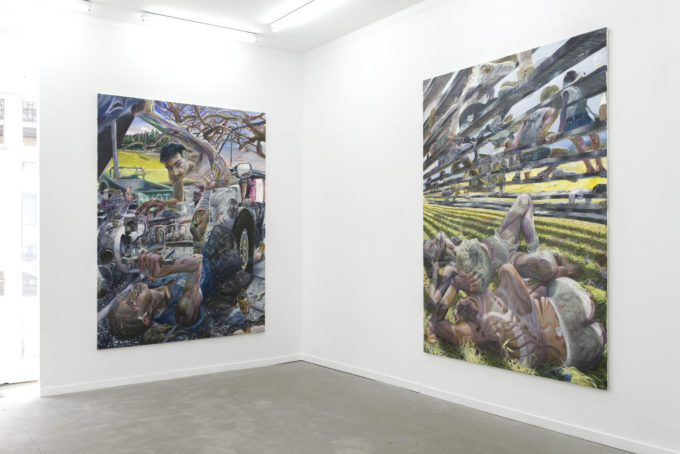 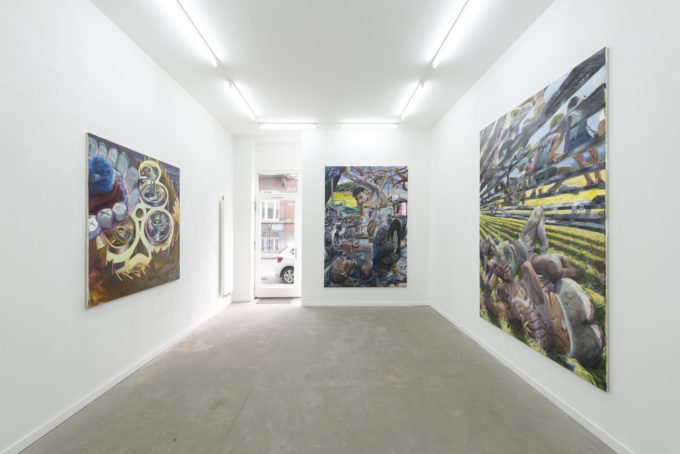 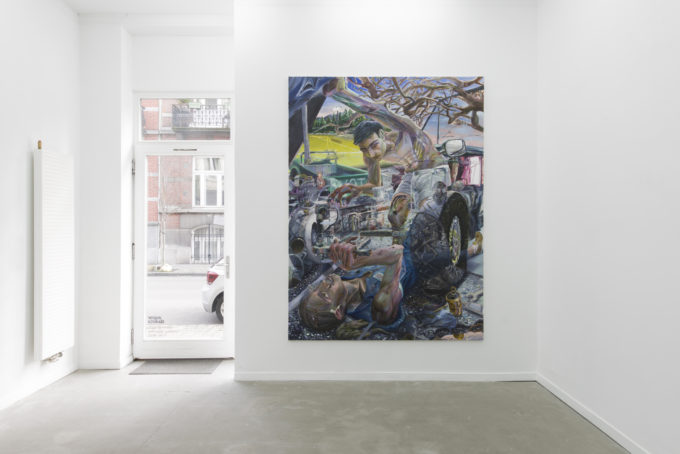 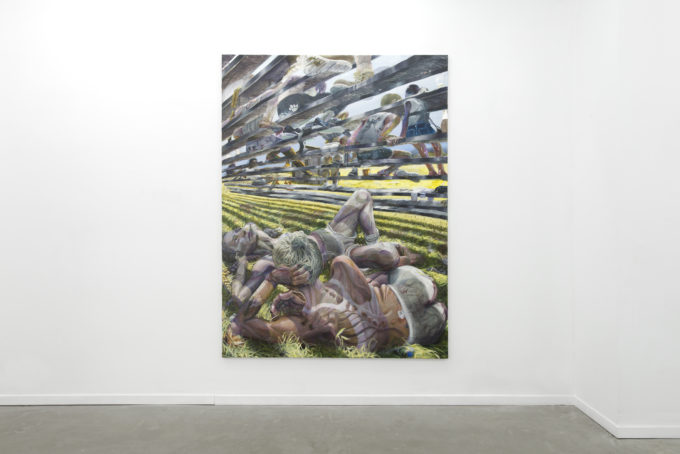 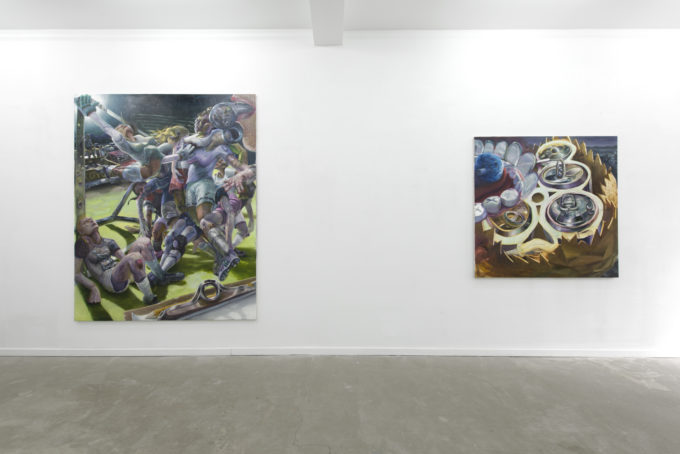 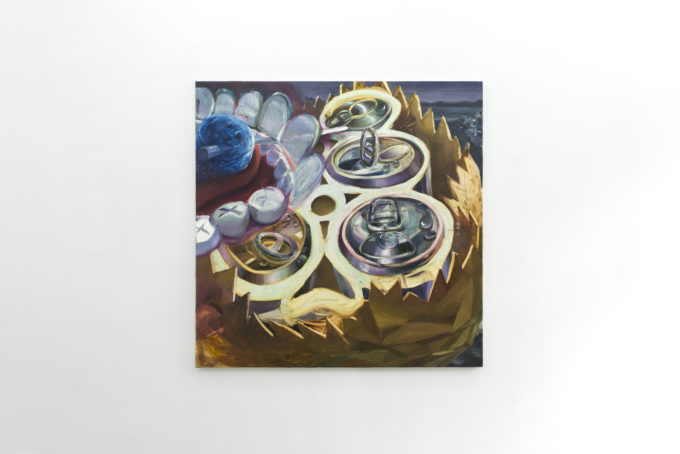 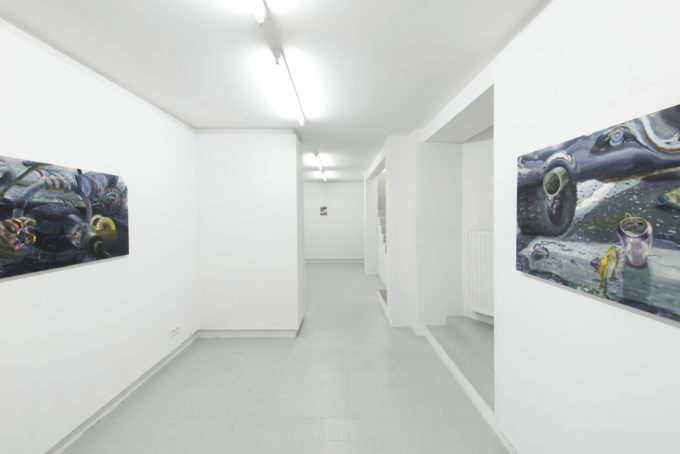 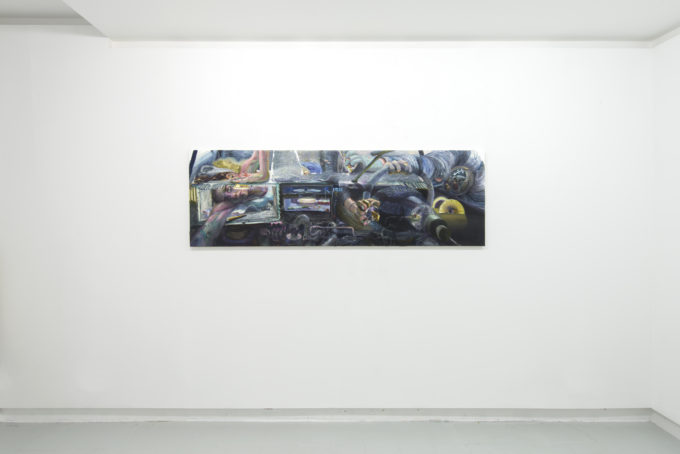 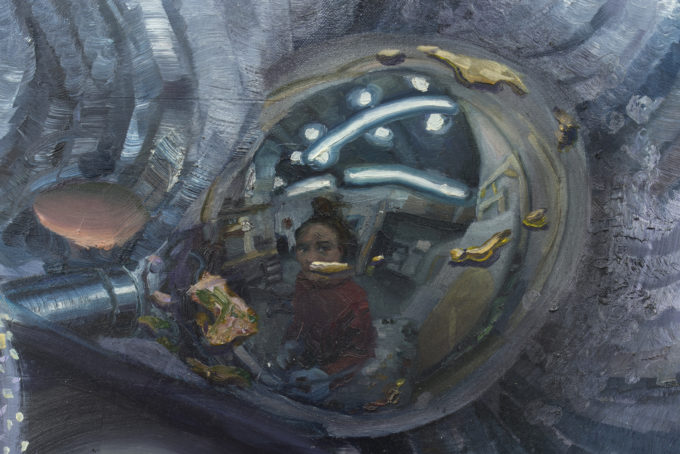 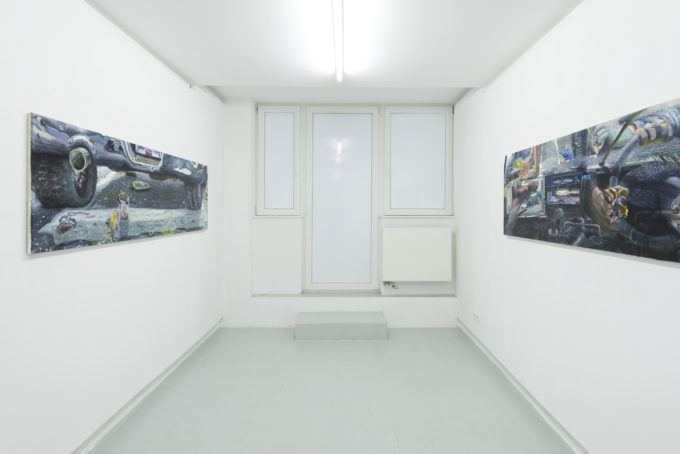 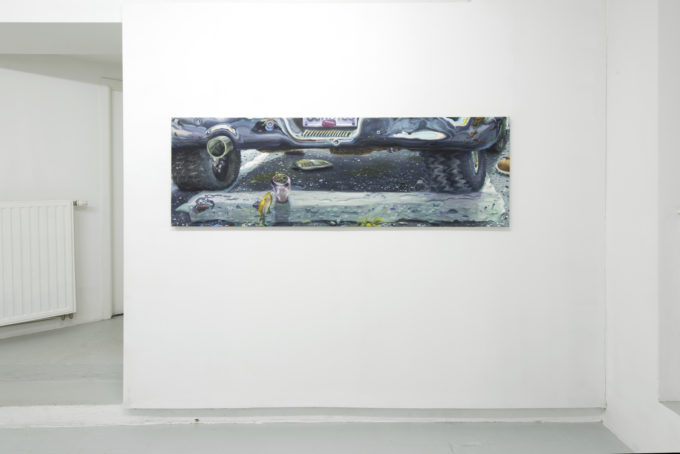 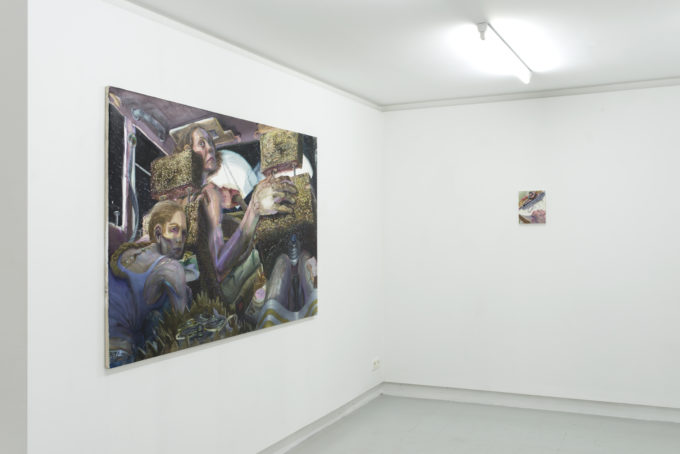 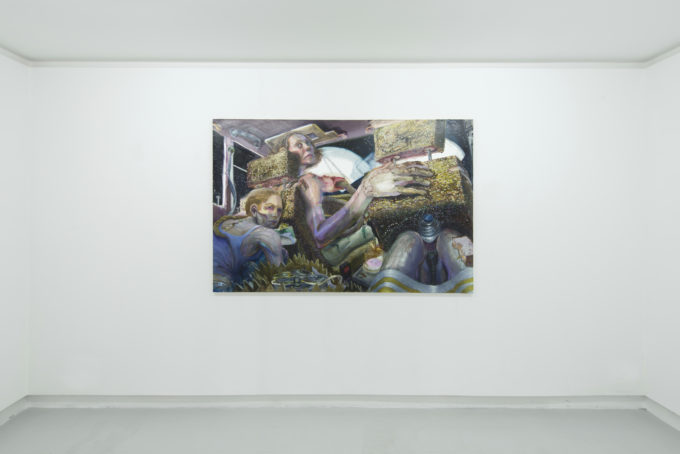 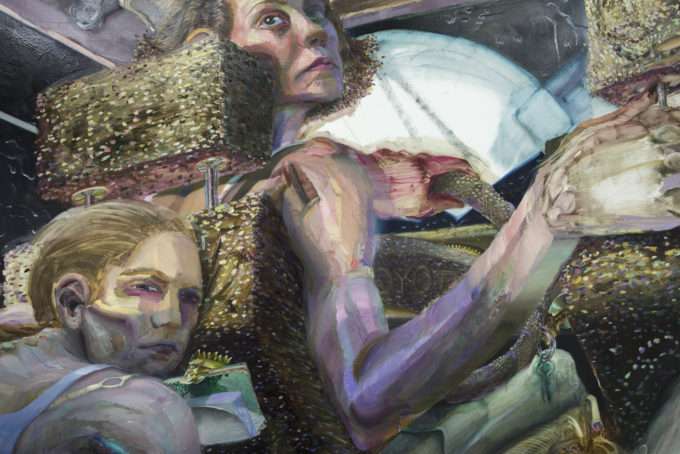 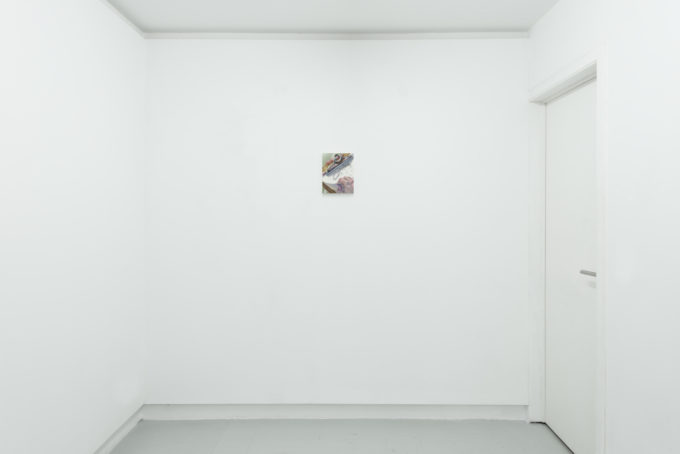 Super Dakota is proud to present Cherry Log Road, Danica Lundy’s first solo exhibition at the gallery. Featuring a group of 10 paintings made through 2020, the exhibition presents a coming of age mythology in a land full of grit, tenderness, wilful characters — a young sensorium of discovery.

Loosening the screws,
Carrying off headlights,
Sparkplugs, bumpers,
Cracked mirrors and gear-knobs,
Getting ready, already,
To go back with something to show

Other than her lips’ new trembling
I would hold to me soon, soon,
Where I sat in the ripped back seat
Talking over the interphone,
Praying for Doris Holbrook
To come from her father’s farm
{…}”

As viewers, we are lured into the position of silent voyeurs, witnessing moments of intimacy, behind the curtains in a David Lynch-like ambiance where reality and symbolism collide. The paintings are detailed and rough at once, their ambiguity translating the complexity of adolescence; new pleasures, latent dangers, uncomfortable growing pains, and burgeoning desires.

The paintings begin with autobiography and are infused with collective narratives, and scattered with recurring symbols borrowed from the artist’s life, art history, teen movie tropes, and a cobbling of working-class Canadian/American culture. Their location is somewhere at the end of the world, in the boonies, where people gather around waning beach fires in second-hand clothes; where there’s nothing to do but make trouble from scratch. It is in part an ode to the Pacific North West where Danica grew up, on a small-town island shielded by water and mountains.

The perspectives given to the viewer are unspecific, and at times conflicting. We are not stuck in a traditional single point of view but offered a choice. The compositions are messy, almost chaotic but it unifies naturally through an unspecified timeline which holds everything together. Danica skilfully arranges details with different tones and contrasts bringing objects forward or pushing scenes out of the main focus creating a formal roadmap for the viewer to navigate. The result is a non-hierarchical way of constructing narrative in order to develop the story at length.

Danica’s technique is masterful and it reveals itself in the details that fill the surface of the paintings. She effortlessly moves from precise brushstrokes to more energetic gestures, giving the paintings an unfathomable quality and unmistakable texture. Colours are cold and vivid at once. Danica paints from memory as someone would paint a map, a map of souvenirs and dreams (or nightmares) laid out on the surface of the canvas. These are paintings of a young woman contending with a world with its cruelty and beauty at the same time.

Cherry Log Road bares the aftertaste of a classic folk song, with the paintings feeding off each other to build a fuller vision of a world through repetition. And we, immersed in this intimate world, familiar and foreign at once, are left with a tune that we keep humming long after we have left the show.

(1) Extract from the poem Cherrylog Road by James L. Dickey

Danica Lundy (b.1991, Canada) received her BFA from Mount Allison University and MFA from the New York Academy of Art. She concentrated in painting and was the recipient of the Leipzig International Art Programme Residency and the Chubb Post-Graduate Fellowship. A three-time Elizabeth Greenshields Foundation Grant recipient, Lundy has exhibited internationally, with solo shows in Canada, Italy, Germany, and USA.