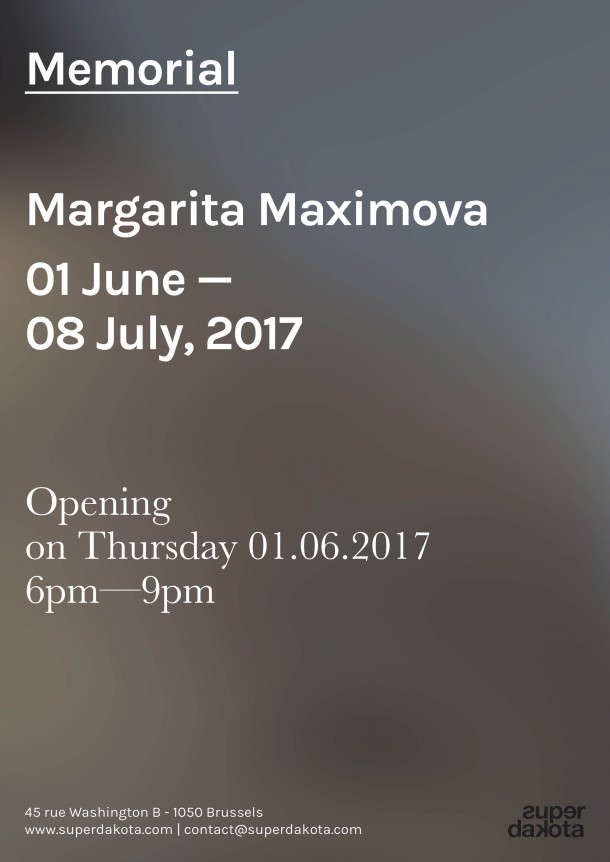 For the Volume 05 of our film program, we are delighted to present Memorial a film by Russian artist Margarita Maximova.

Margarita Maximova’s (°1990 Moscow) video works distinct themselves in a refreshing way from many of her artistic ‘digital native’ coevals. Unlike many young contemporary artists who often pluck their inspiration ‘ad hoc’ from the fast propulsive and multi-faceted flow of images and information, the videos of Maximova possess a welcoming, fierce and gentle poetic inertia, expressing the course of time and it’s abscence of it. They are apposed to the contemporary adagio of the immediate hyper individual expression of the hyper individual emotion, and given their slow-moving and serene process, embody a rare universal-emotive quality. Maximova turns this indispensable need for quiet observation in stimulating the viewer to project his own questions and desires, without knowing the – mostly very emotional – autobiographic element behind it. On an emotive level you could say Maximova’s videos are almost sublime, in analogy to the late 19th century painting of Caspar David-Friedrich or the contemporary video art of Willie Doherty, where the landscape appears as a dominant, sensitive visual element, that appeals on the psychological receptivity of the spectator making it emotionally his own.
Although the ‘landscapes’ in Maximova’s works were created with fast, sometimes very basic digital techniques, she succeeds in realizing them with the same kind of sublime sensitivity, that radiates a strong expression of psychographic displacement, melancholy and ‘Sehnsucht’. In this sense the video works of Maximova are strongly contemporary: they show abstract, slow and uncanny pictures that seemed to be captured for – and by – young artistic expats who feel a need to make any city or country their own, forced by the internationalization of their art practice, without ever really feeling at home. From a thematic-visual point of view, Maximova’s work is in a positive manner to be mentioned as ‘out of this time’. The inert, quasi (theatrical) narrative image construction and universal thematic quality of the video works spontaneously create a surprising conceptual character, which subtly indicates the use of cinematographic and narrative codes. Eventually, the medium video is hacked itself. In that sense, the content of Maximova’s works show – at least emotional- resemblances with video artists such as James Coleman, Catherine Sullivan and Gerard Byrne, who, in their videos, adapt these theatrical and cinematographic codes on a meta-medium level. These artists however, belong to an entirely different generation – whose careers broke through in the second half of the 1990s – a period when video art as a conceptual medium began spinning off against its own technicality. In this light of many young contemporary video art, that often refers to or inspires itself by popular culture phenomenae – music, games, social media, etc .. – the references in Maximova’s work are – to say at the least – striking. In my opinion they show an authentic maturity, not only towards the medium she practices, but also to the genuine emotional content she shapes them with. It generates a spontaneous belief in slowness, as well as believing slowly. It hinders as it were, the passing of time. Exactly this creates something fundamental, something our contemporary society lacks: the construction of a genuine memory and the sharpening of a long-lasting, intricate memory.