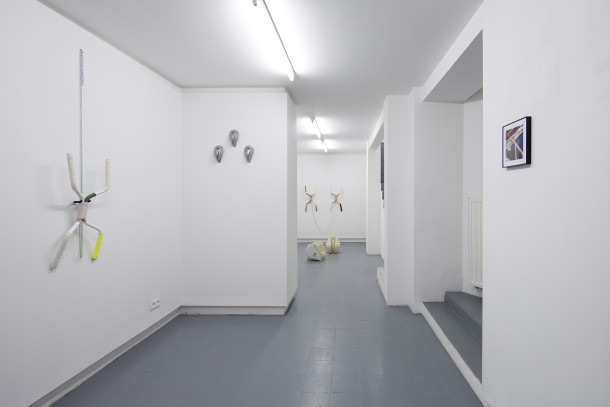 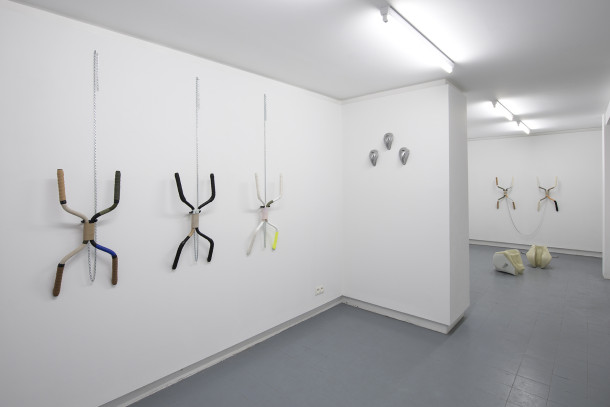 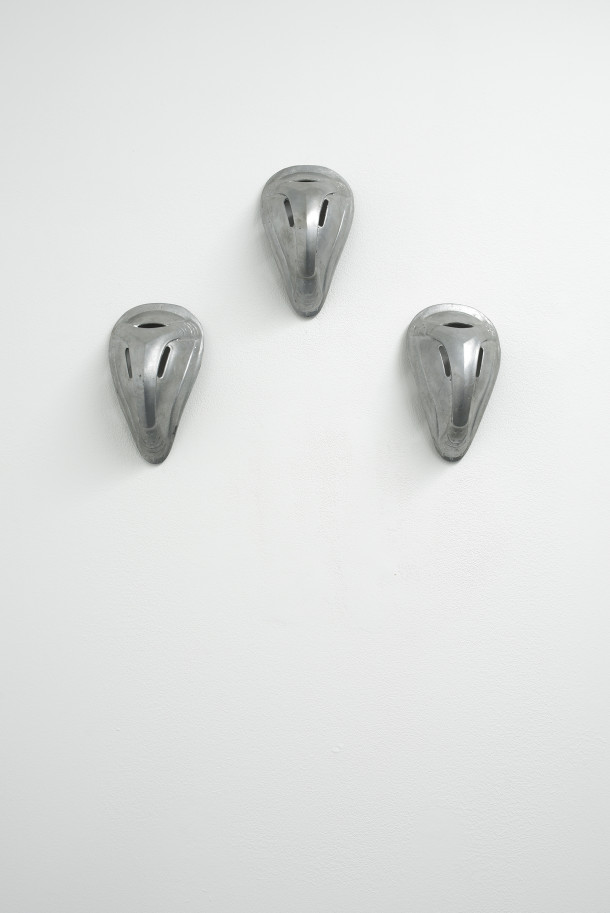 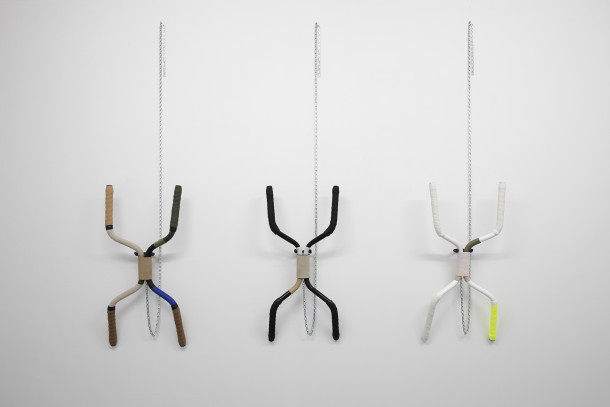 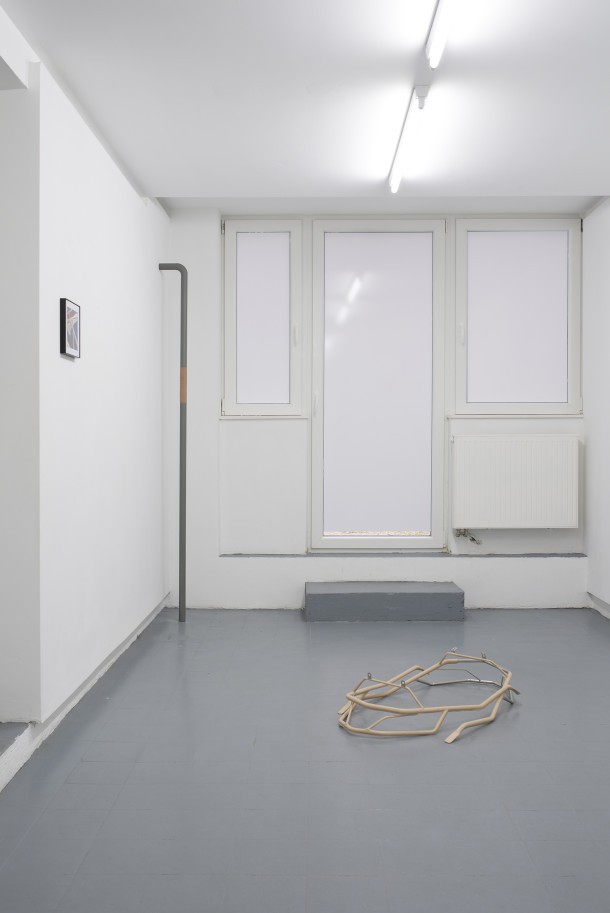 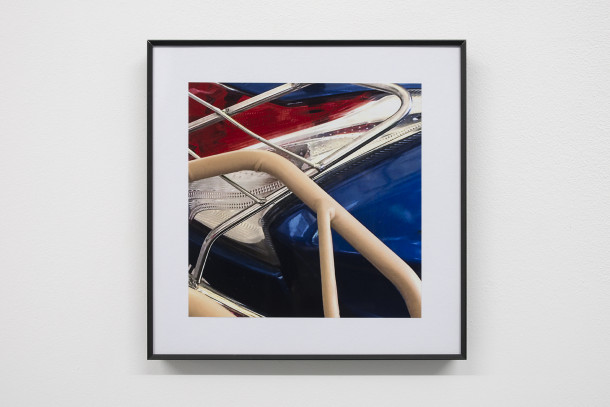 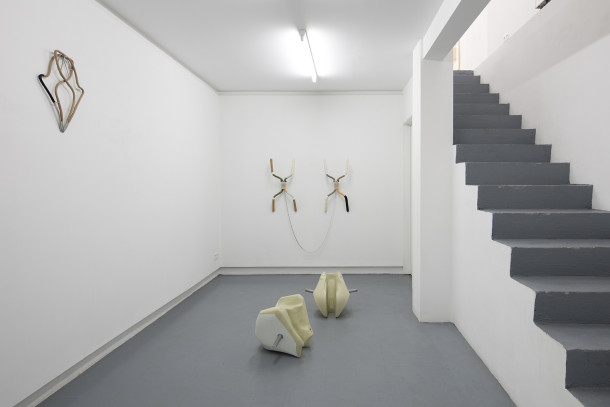 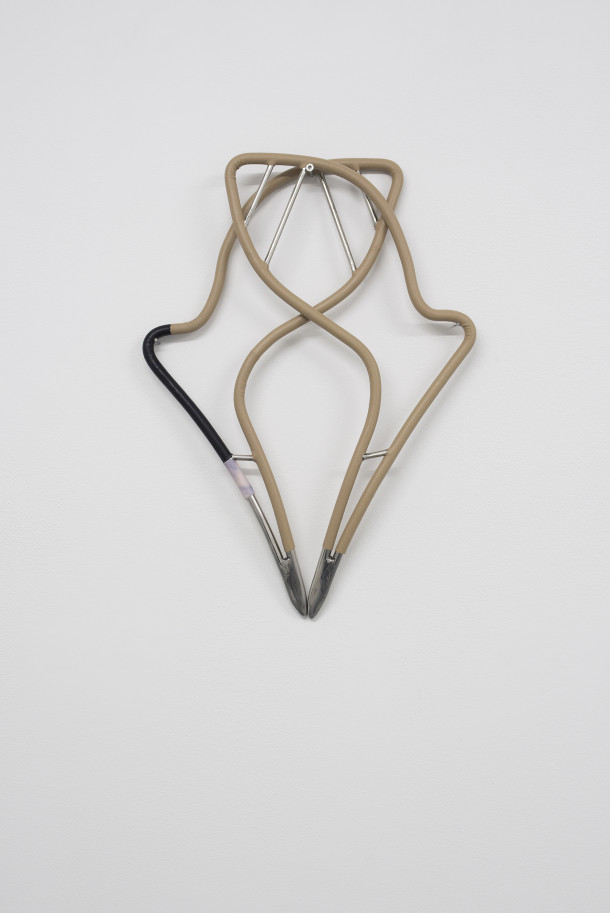 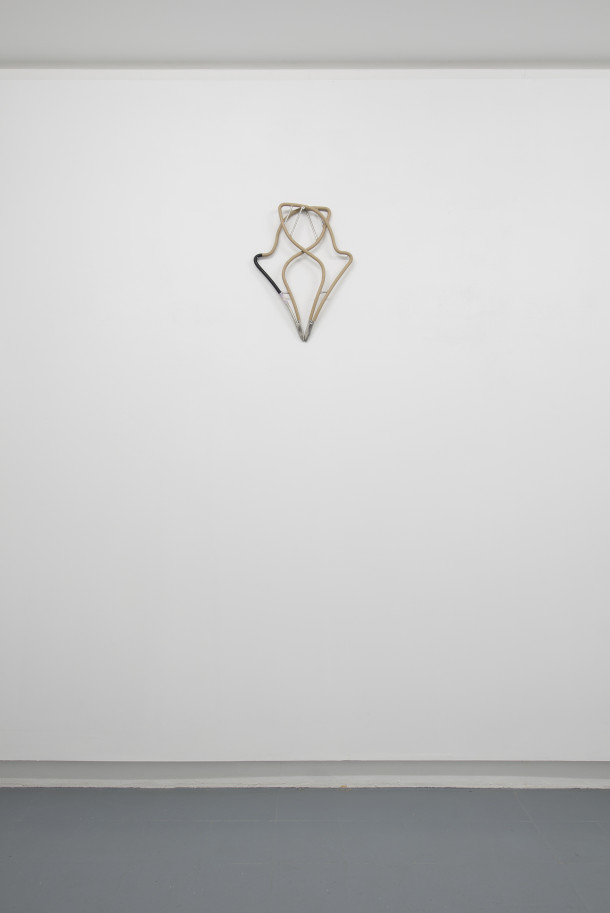 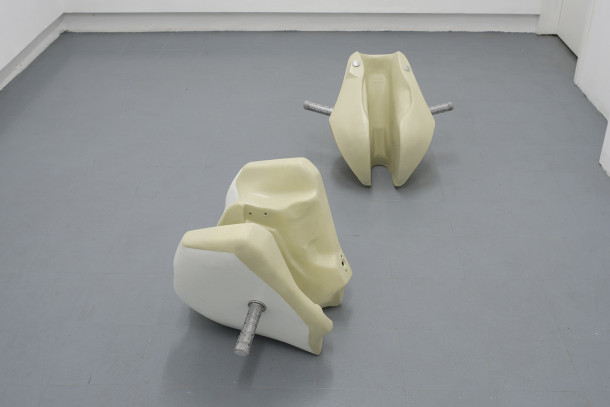 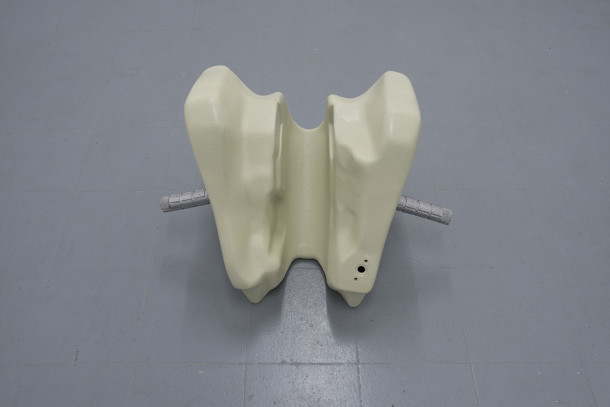 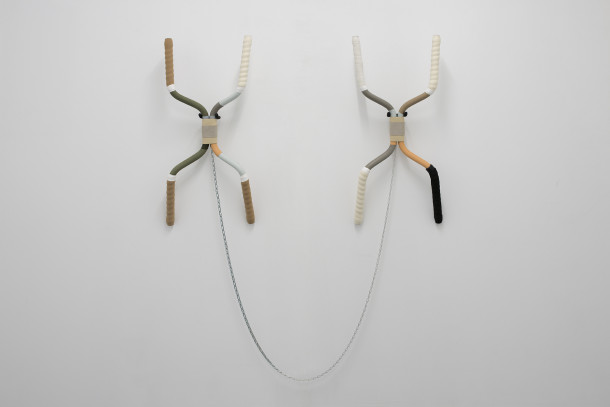 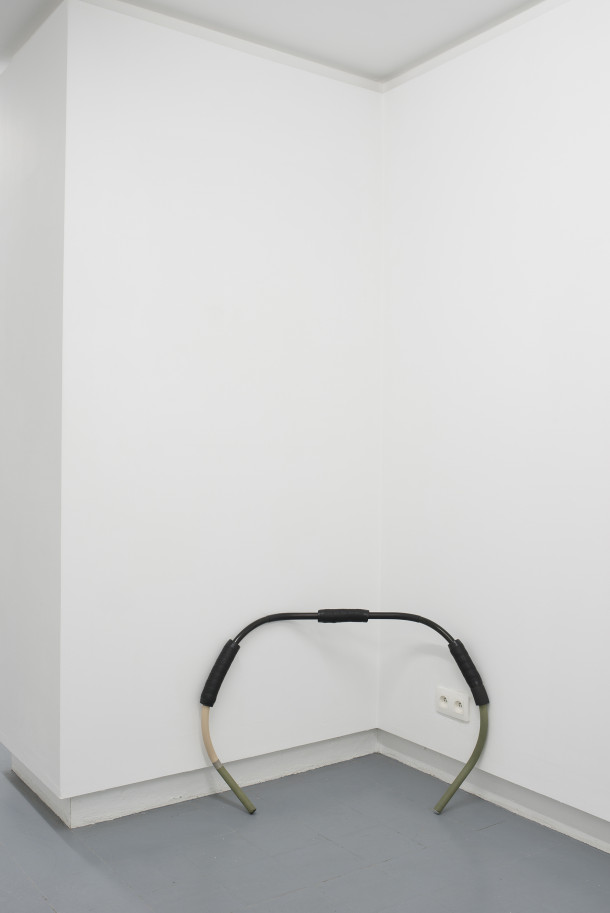 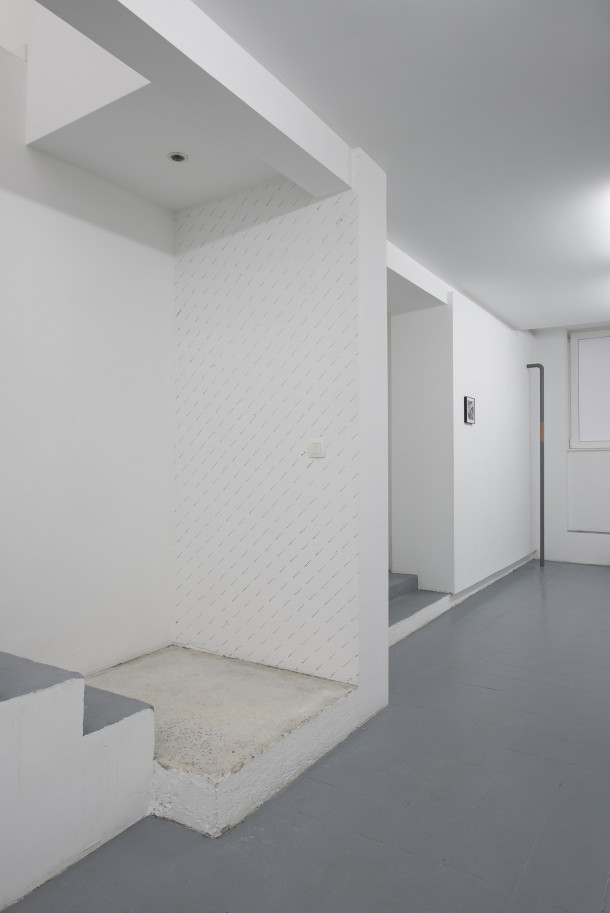 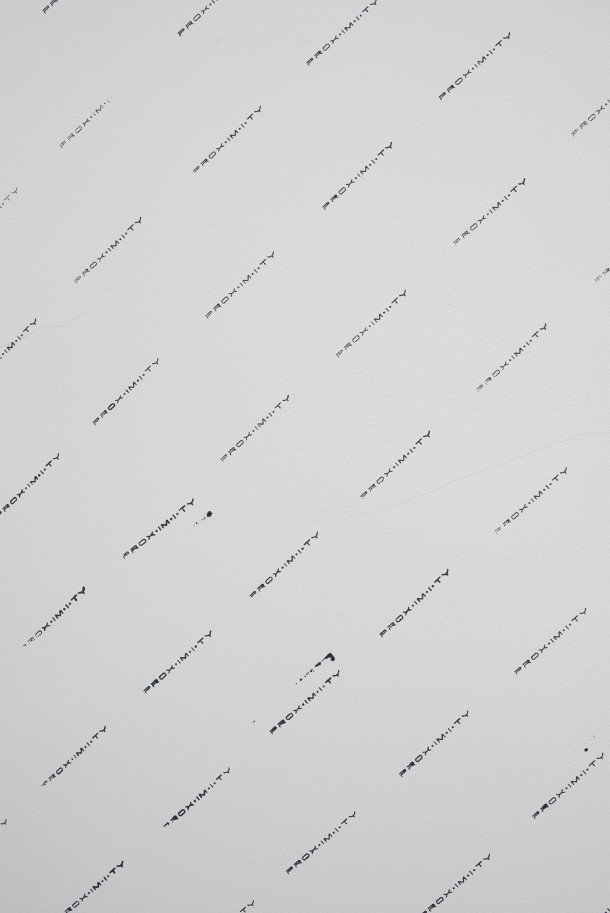 Interweaving materials, molecules and affects, Jeanne Briand’s research embodies the texture of an imaginary world where the invention progresses by successive improvements of a system that is never given, so much as reprogrammed.
Focusing on the echelon of the subject inserted into a certain environment, the artist models forms achieved as much through the customisation of one strand of DNA as through one archaic mutant ornament. Prox•im•i•ty, her exhibition at Super Dakota, combines two series from of a new cycle of productions initiated in California as wells as in India during a residency in Bombay last spring.
In the densely populated city, the artist notices the protection guards which systematically wrap up the bodies of motorcycles.
Custom made, these structures serve as much to protect the bikes from potential impacts as to keep others at bay : together ornament and protheses, they swaddle the hot rods like a steel exoskeleton. Displayed on the floor or on the wall, the body initially augmented disappears completely, raising the accessory to the status of substance.
Detached and transformed, these structures become independent while keeping alive the memory of an absent body. From counter-shape they grow into a form, and wrapped in leather by the artist, they transform into a simulacrum of organism – becoming a technobody of the Proximity Max* series.

The second series presented by Jeanne Briand, Chromo Turbo, embodies the interdependency of the ways of making : the mechanical extensions, tools, bikes, ornaments or protheses oriented towards the external environment ; but also the genetic program, which thanks to the progress in science, also appears controllable and reconfigurable at leisure. Jeanne went to Los Angeles to develop this project in custom garages, the pieces, arising from the observation of motorcycle and car restoration workshops, reconnect with the genetic aspect of her early works. These pieces, started before entering Les Beaux-Arts de Paris, with the Random Control series (2010-2015), were shaped uteruses in blown glass were ,made from the test tubes of research-laboratories.
This corpus will then evolve into the Gamete Glass (2015-2017), an opera of genetic glass where glass gametes generate sounds enabled by the very own breath that created them.

Prox•im•i•ty offers through these two new series, an extension of the field of manipulation. Therefore, in the Chromo Turbo works, the pairs of handlebars assembled two by two and coated with coloured leather make up genetic sequences of chromosomes. From the same residency in Los Angeles, Jeanne Briand shows modified gas tanks resembling ready-made protheses, as well as a series of masks – inspired by primitive artefacts – and designed from body armours. Alternating between the microscopic scale of genetic and the macroscopic of social apparatus, the artist unveils how virtuality and reality are inextricably bound by their infinite re-programming. Finally the photographs respectively displaying a detail which triggered the two production cycles, in Bombay and Los Angeles, are witnesses in their own way that every details, even if anecdotic, can switch through small operations – syntheses, build up, decontextualisation – to a fantasy of a near futur, already contained, seeding inside every fold of reality. You just have to come and activate it.

* Proximity Max is a previous body of work by Jeanne Briand