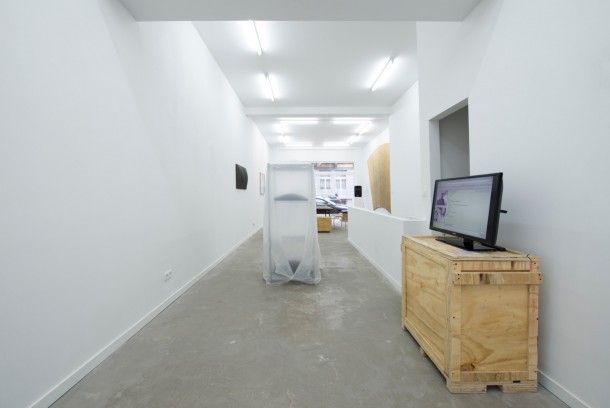 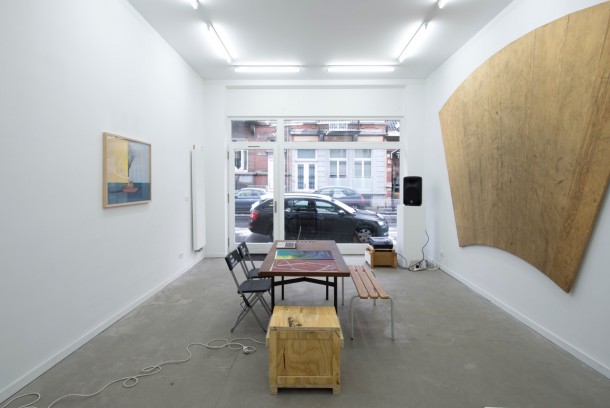 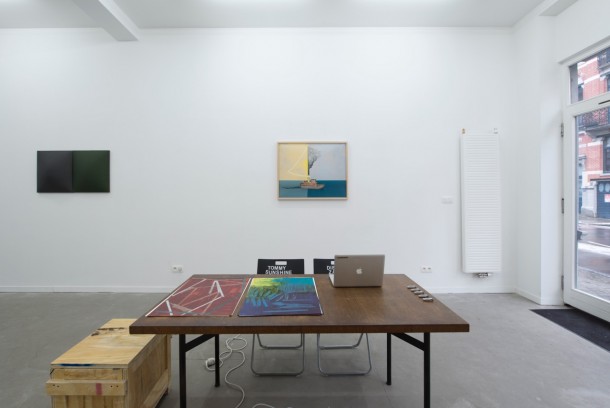 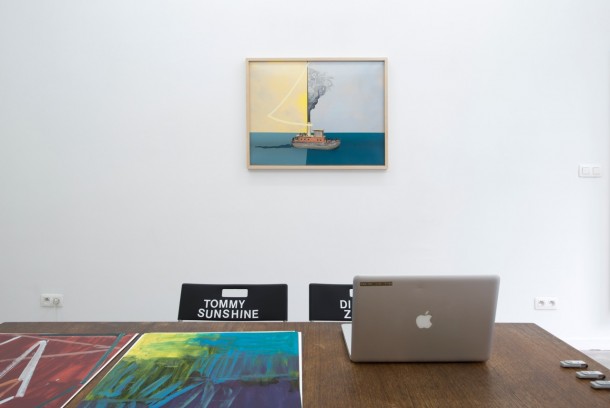 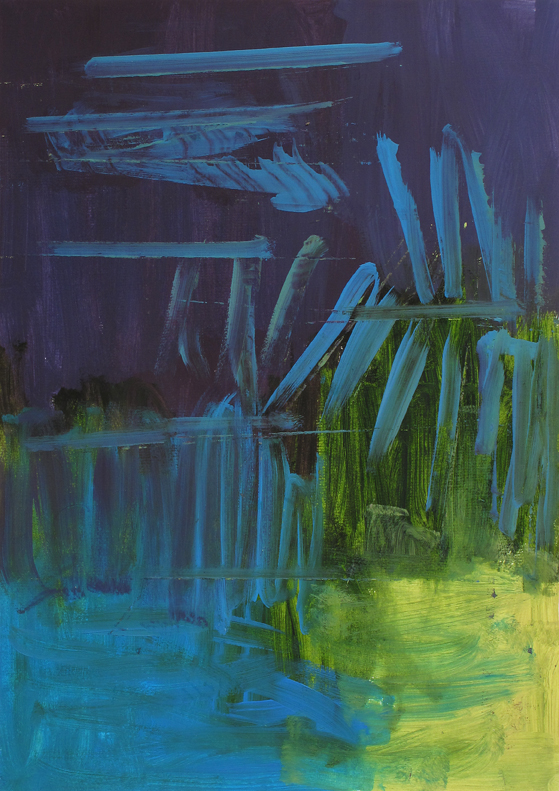 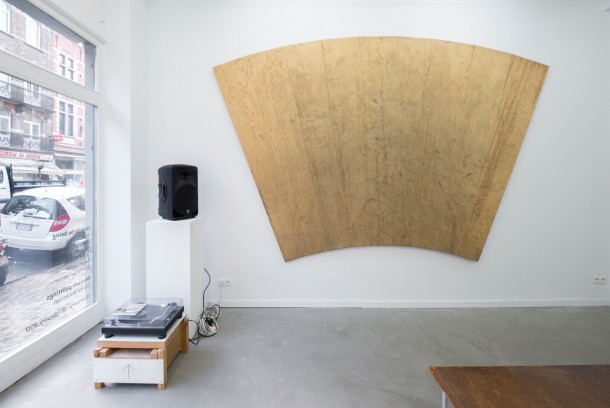 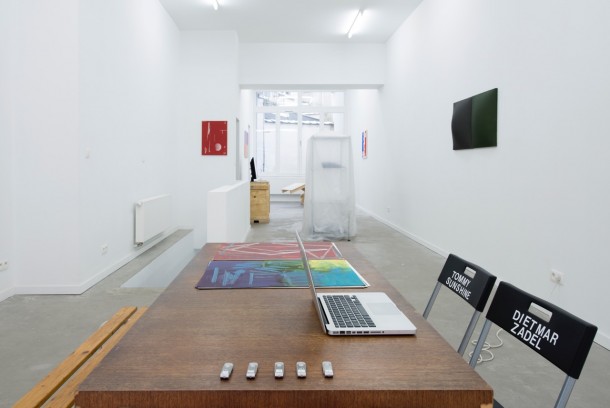 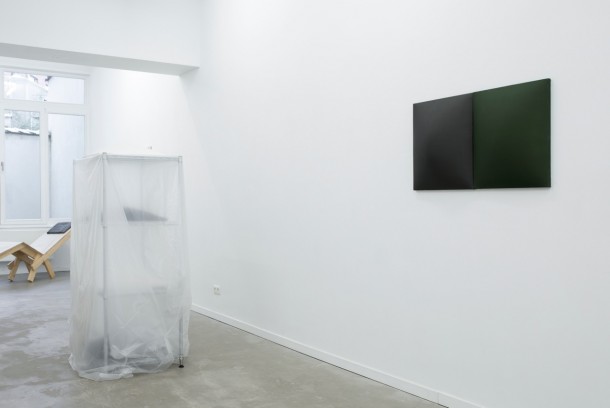 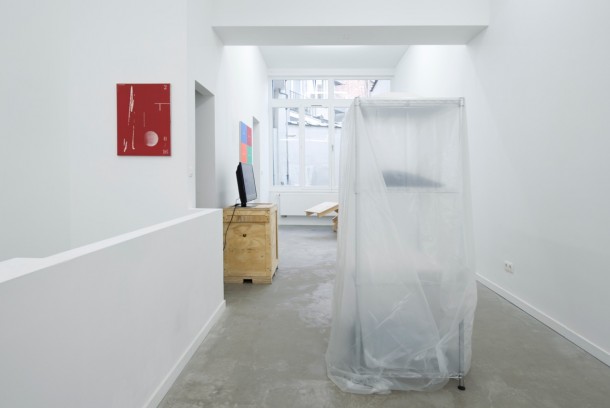 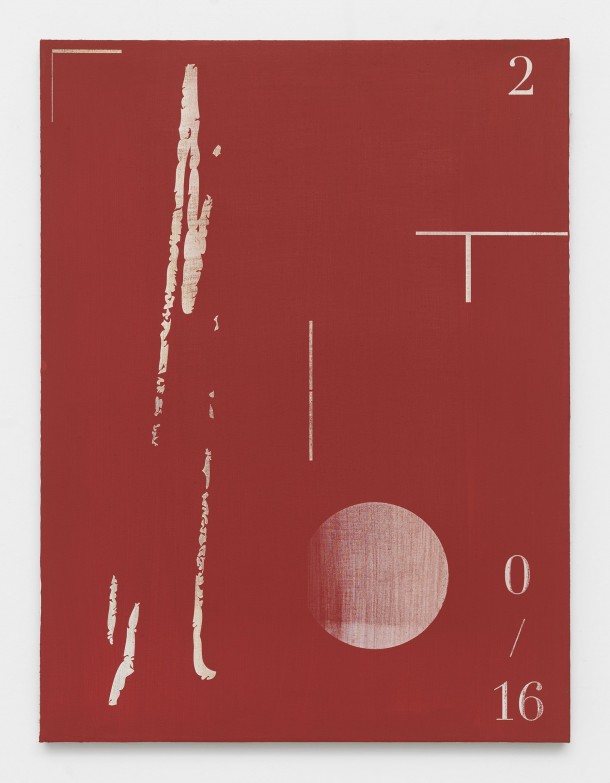 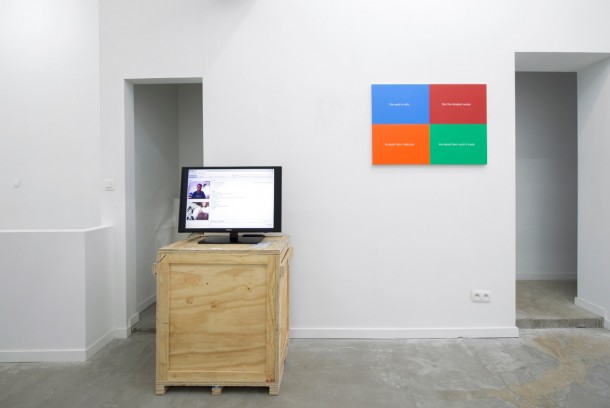 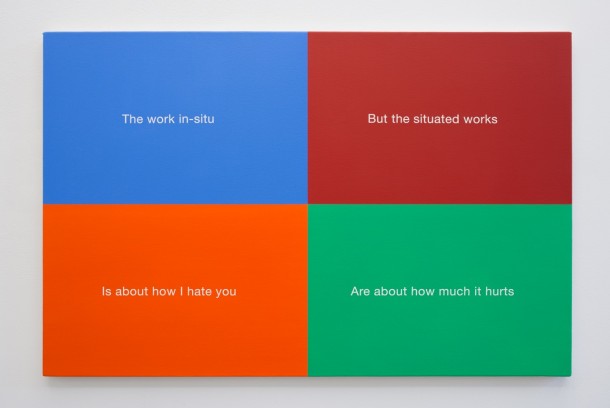 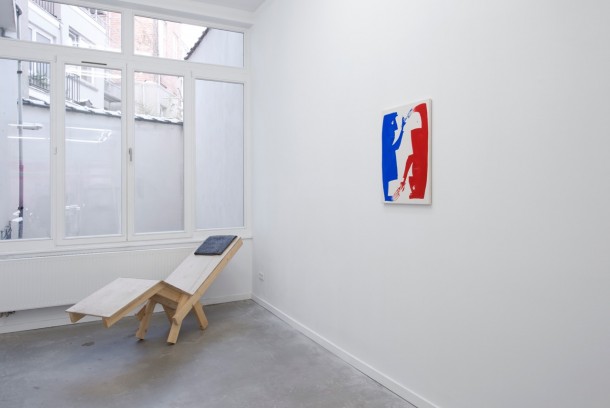 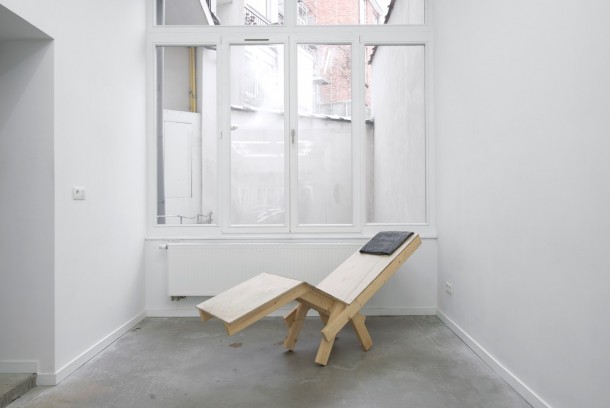 How to be being is a show about working which groups the variant practices of Alex Clarke (UK); Pieterjan Ginckels (Belgium); Molly Eliza Gough (UK); John Houck (USA); Dean Levin (USA); Christian Vetter (Switzerland).
The show’s move from object to verb- from showing works to showing working- is something we might call ‘studio practice’. Studio practice here isn’t really about the studio- which can be anything, anywhere, anybody and therefore becomes an expanded idea that indicates when an artist is working- simply designating it as a state that states the fact that they are.
The studio is not a private space of withdrawal; in adjacent terms the studio is next to the world- fashion, music, the art world, most likely a job, love, friends, other people, film(1), literature(2), TV(3) etc, with the self-reflexive capacity to reflect all of it.
The artworks that result from working are vessels for dialogue with its audience. Working therefore becomes a threshold between private and public, internal and external, between artist and viewer. An artwork performs the gesture of the artist presenting their thoughts, working presents the gesture of the artist being… how else can an artist make themselves be other than by working?
We can understand that there is a compromise in an artwork by leaving the studio(4), even the compromise of an artwork being finished(5) and the past-tense fact of these acts means that the thinking has been thought and, to some extent, closes the work to be ready to exist alone. Even a painting of the day’s date(6), even if shown on the same day of it’s completion(7), is completed and confirmed to the past-tense. Working is in the urgent tense of right now; live; yesterday, today and tomorrow, but it is also the way in which an artist can fantasise for the future in the present. Progress?(8)
If we locate working-and building and dwelling and thinking-in the space of studio then we also locate the aspiration and wanting implicit in working. (Optimistically) working means trying. Why try?(9) What can be a basis for a base-level of wanting? Maybe it could be that one reason to try in the studio is to have a better studio.
I’ve been sharing a studio with Hope who is my best good friend in painting. Sometimes I go to the studio just to see her but eventually the pauses between our chatter get longer and inevitably I start working. Mostly we talk about the problems we have with ourselves. Once, Hope suggested that I just ‘be myself’, which, rather than being good advice, confirmed that her job was to believe when I didn’t. The studio Hope and I share is on the top floor and has great windows which means our position is that our feet aren’t on the street and our working, artworks and selves are under-the-sky(10). Or, conversely, windows presenting a view rather than skylights to the sky provides a grounding perspective of the reality that our studio is a piece of capital city real-estate. No matter how robust or ‘educated’ our delusions of transcendence, the bad feeling feels bad. Hope is moving away now, out of London. The place she is moving to needs re-decorating and Hope has the idea that I know what I am doing but I tell her that my advice is just information I’m passing on from a house painter I know.
This house painter works without question. The weather, which his painting keeps out of buildings, has caused his age to be anywhere and unknown. He assumes that this is out of spite on the weather’s part in accordance with his success as a good house painter, but, still, he respects its wills and ways. He has the self- love and egotism of a boy who thinks he’s ugly. He is so knowing that he has assumed the position of unknowing so to know the rest of everything else. He appears to know an event’s unfolding before the event does and he has the same advantage when dealing with other people. He is complicated and he has lived with much variation prior but it is hard to imagine him with any other occupation. He is simple and appears to take pleasure in things that only he knows. He is painting the windows of an ideal studio.

If the weather gets in, the window will rot, wall will crumble, building will tumble. It’s the paint that keeps the weather out. The damp, the wet, the dry, the warm, the cold, the frost. You have the internal and you have the external and the walls are lines of division between these two spaces and the windows are a portal in the architecture of this line.
New timber needs the knots stabilising, then you seal the wood with primer. Once you’ve primed the wood to sealed and white, the holes and imperfections that you need to fill become evident. Fill them, sand the whole thing back, rub the whole thing down. Fill, neaten and complete the joins and angles with caulk. Paint with undercoat. Where the primer seals the wood, the undercoat lives to serve the topcoat. It is totally selfless and utterly committed to the topcoat. The undercoat makes the topcoat look good and takes no credit, its whole purpose is for the top coat and so it loves it completely. When the topcoat is showing off and shining, the undercoat sits underneath proud and smiling. A good painter know this and makes the most of it: a good undercoat means a good top coat. After the first undercoat has cured/gone-off/dried, rub down and apply another coat. Once that has dried, rub down and then apply your final undercoat- treat this as you would your top coat. Take care- if you died tomorrow your windows would not be an embarrassment, the finish of the undercoat is an admirable job alone. Whilst this final coat of undercoat is drying, take the time to give it an outing- weather permitting. Let it glory in the sunshine for a day or two to say thank you. Apply your topcoat. This should now be a joy.
Always check the weather forecast before painting.

I learned to paint on the longest bridge anyone had ever built. The bridge located the two places at either end of it where, to each place prior, neither had been a location before.
I was from one place and I painted my way to the next place, which I had never been to before. I worked
alone and it was the first job that I liked as a result. I painted the bridge to keep it from rusting and it was a good job for me because it never ended. Trouble was, you see, that bridge was so long that by the time I had painted my way to the end and had it all anew and brilliant, the start was due for painting again- had become old and rusting.
I went round in circles on that bridge for many years until, that was, someone invented a new paint. This new paint never dried; just made itself a hardy skin on top, under which it left itself wet and greasy. That coat of new paint was the last time I painted that bridge- the start in the past was just as fresh and new as the end I worked toward and where I finished.

Alex Clarke (b.1988 – Nottingham), lives and works in London. Alex holds a post-graduate diploma from the Royal Academy of Arts in London. Recent exhibitions include Nicelle Beauchene (NY), Evelyn Yard (London), Johannes Vogt (NY), Paul Rodgers (NY), Super Dakota (Brussels)… He is the recipient of the Jerwood Purchase Prize (2013), The Agnes Ethel Macay travel award (2014) and he is part of the Cini Foundation in Venice. Alex is also a guest lecturer at Central Saint Martins in London. 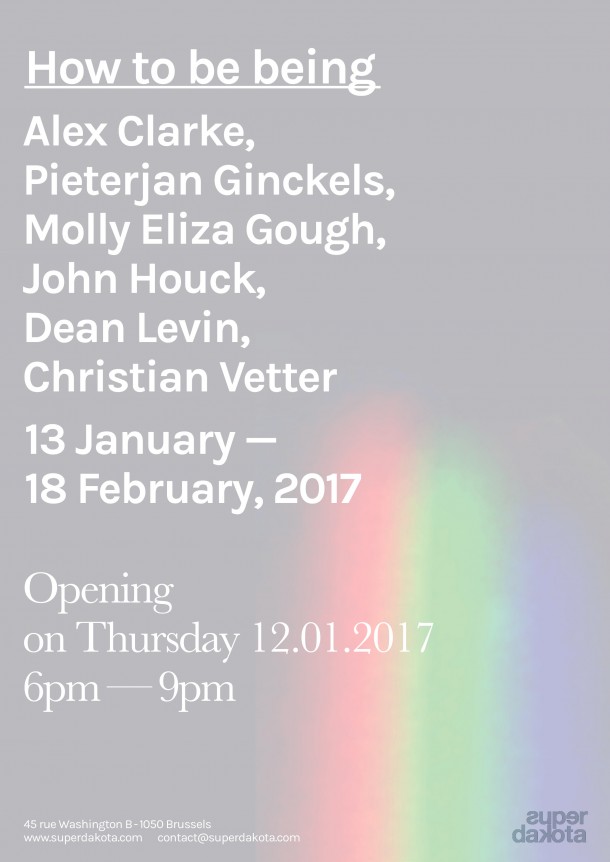