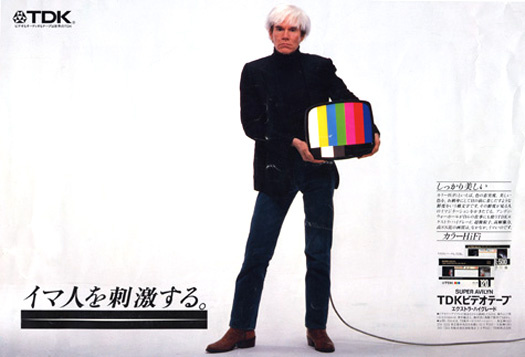 From the classic 1968 campaign for Braniff International Airways with Salvador Dalí to the more recent 2015 campaign of Brioni with John Armleder, Karl Holmqvist, Tobias Madison and Seth Price, there have been crossovers between art and advertising. They are both closely linked with a market and look at each other’s seductive powers for inspiration.
René Magritte, Jasper Johns, Robert Rauschenberg, James Rosenquist and others began their careers as commercial artists and later used its techniques in their own work. Artists like Francesco Vezzoli have replicated the strategies and aesthetics of commercials while others like Jeff Koons investigated the themes of brands, pop and consumer culture in their practice with at the pinnacle Andy Warhol bridging the gap between advertising and art.
The advertising industry is a creative one where advertising agencies have to create and communicate clear messages in a simple image or a short commercial. They need to be creative and at their often turn to the methods of the arts to for a maximal impact on the viewer. Occasionally they even commission artists for their campaigns and try to align themselves with the arts by featuring artists as endorsers in their ads.

Louis-Philippe Van Eeckhoutte is an independent curator based in Brussels. He is the founder and editor of the interview series Drawing Room Play about the art, books, music, movies and people that inspire us. He was the Artistic Director for the 2018 edition of the Brussels Gallery Weekend.