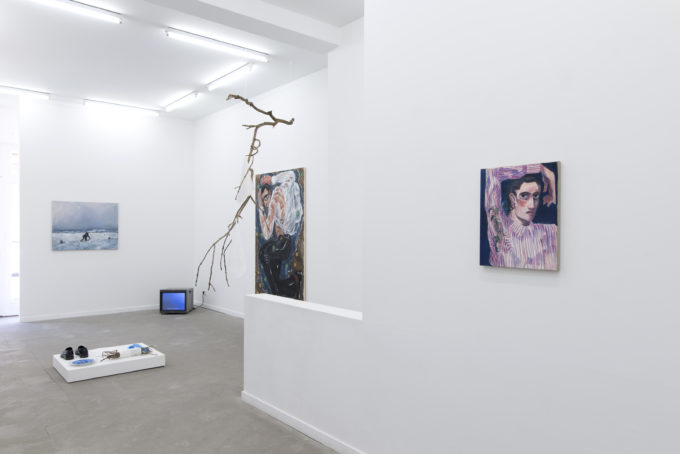 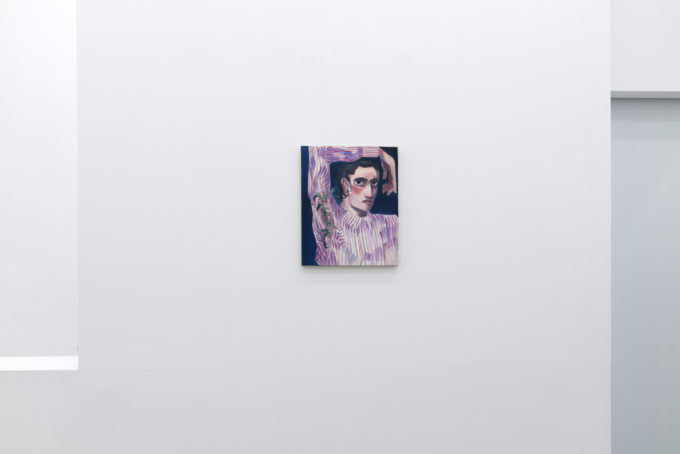 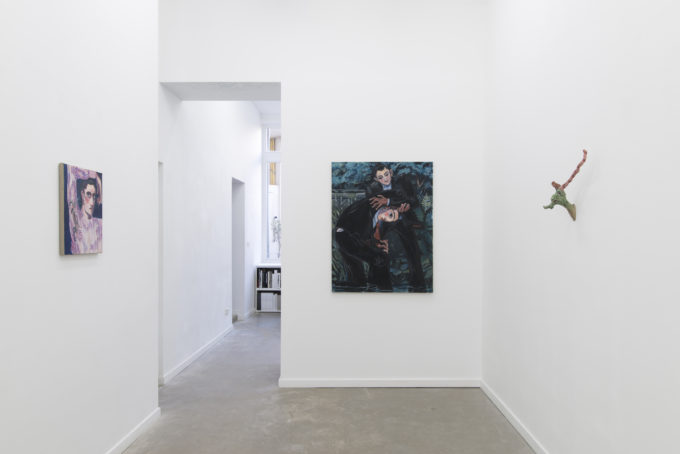 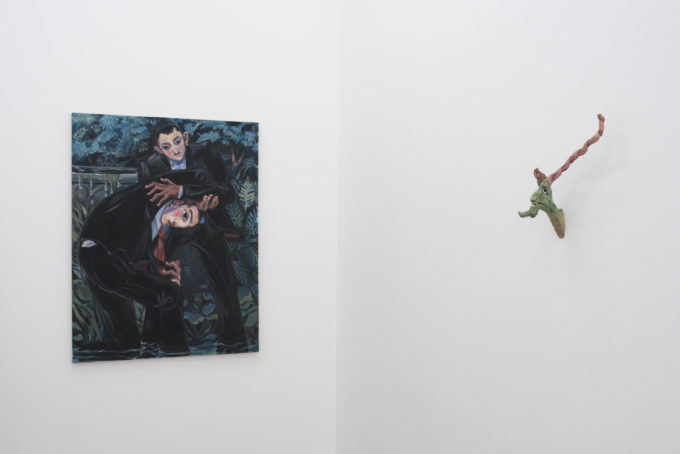 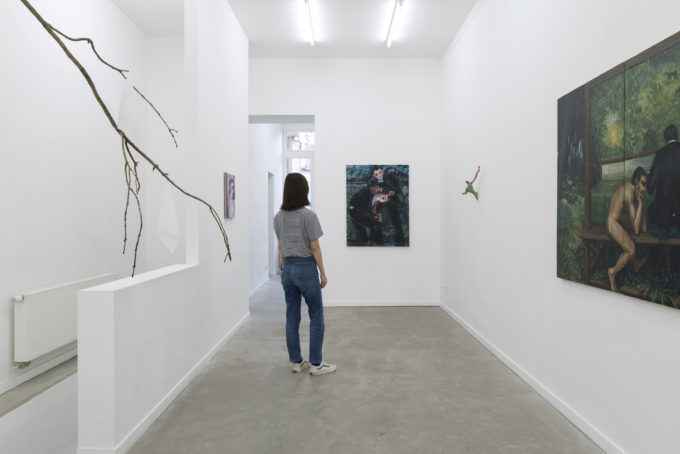 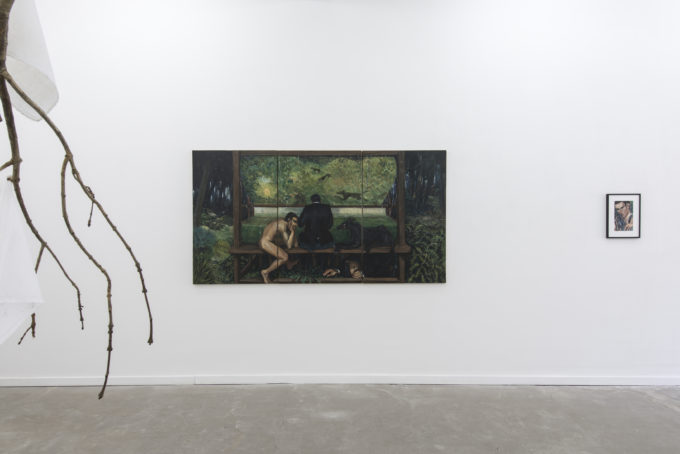 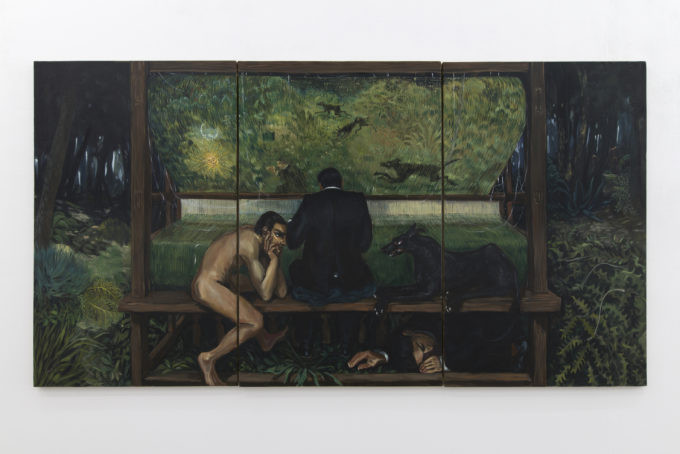 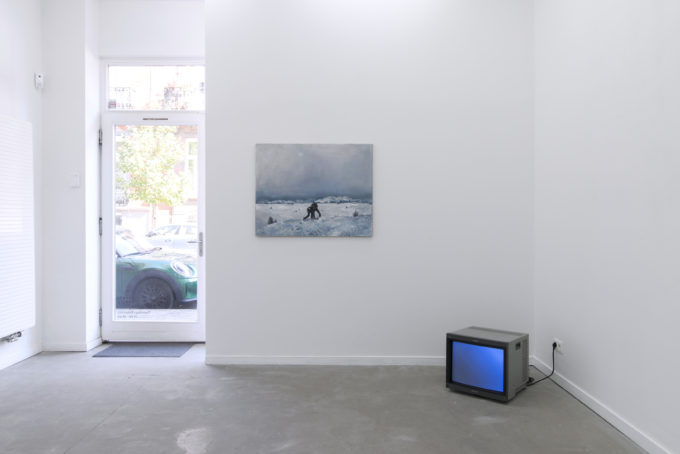 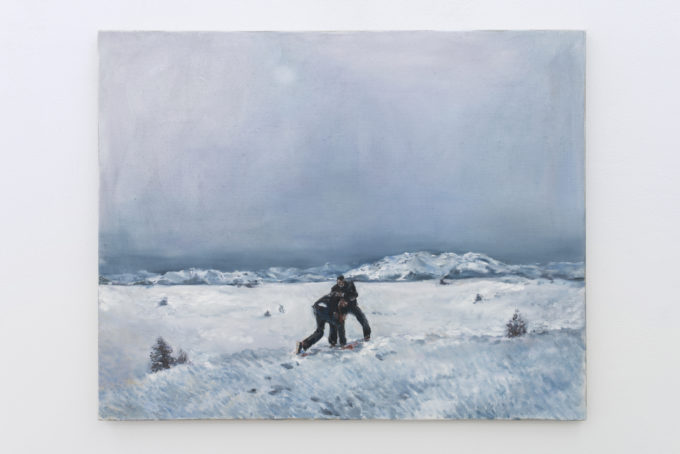 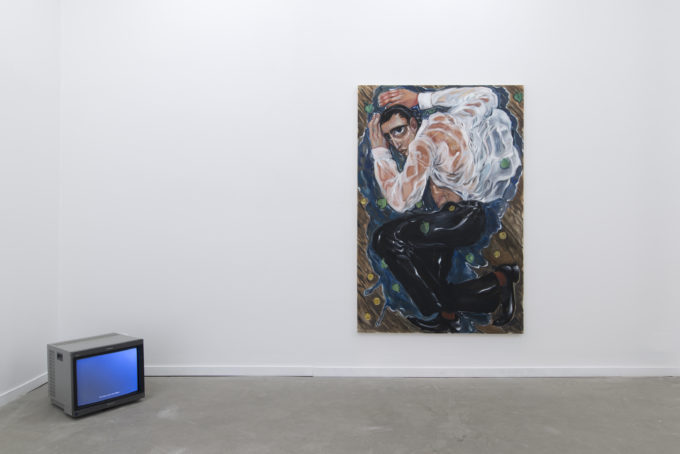 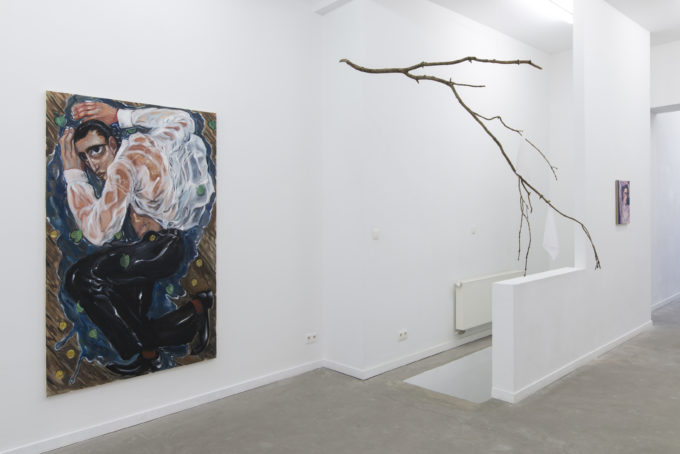 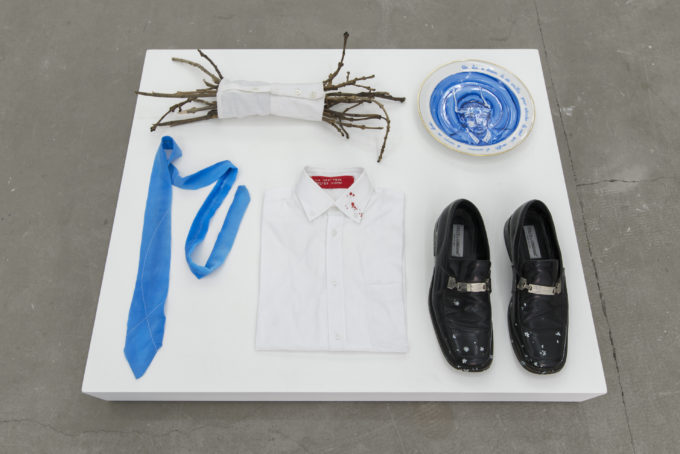 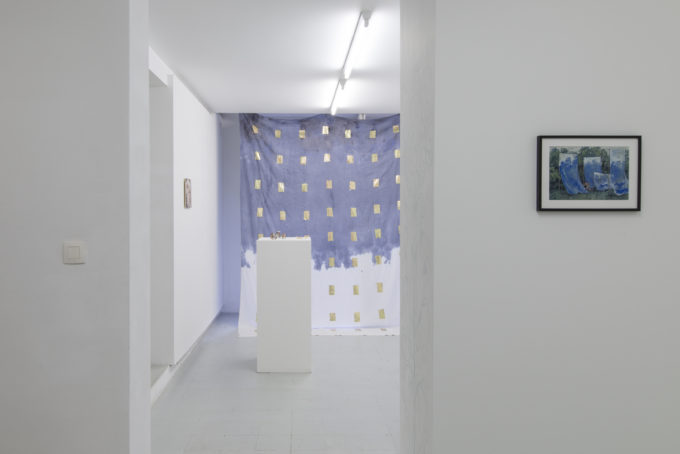 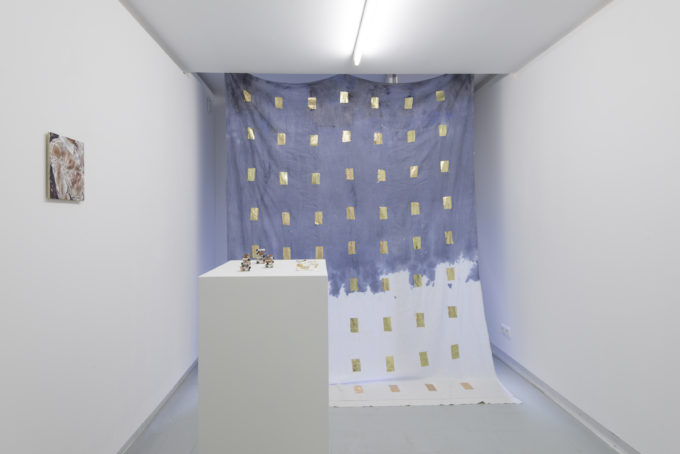 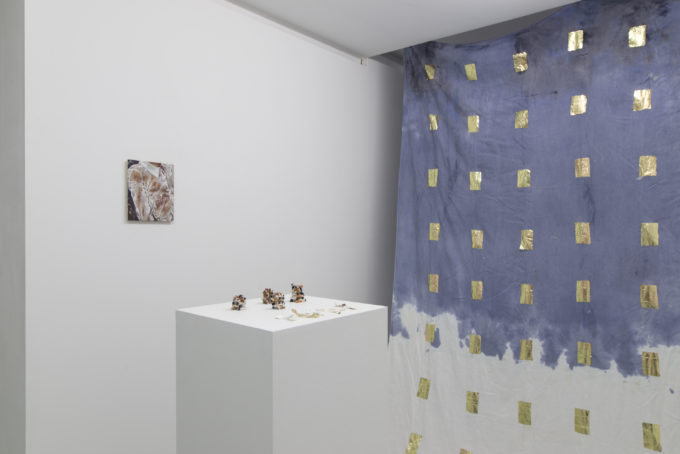 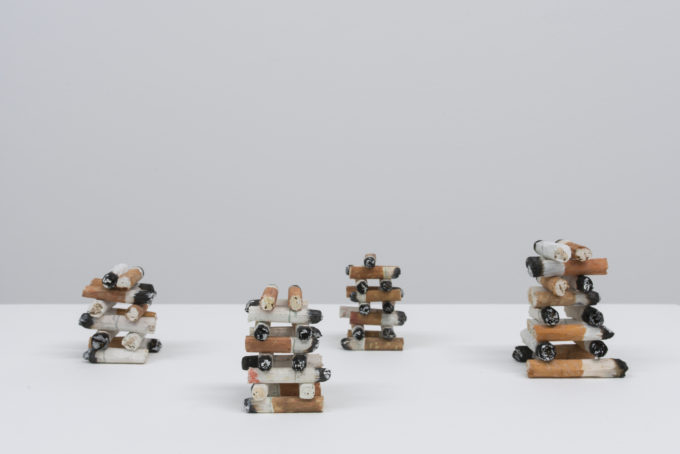 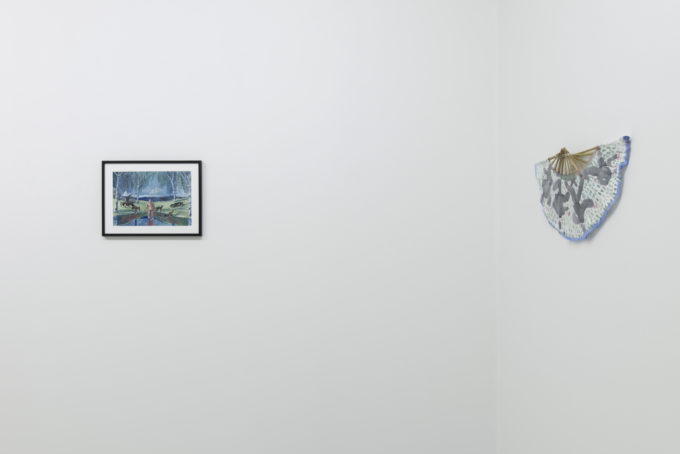 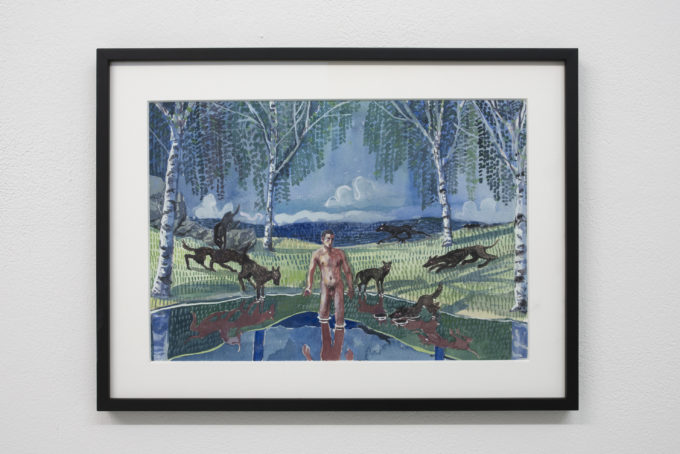 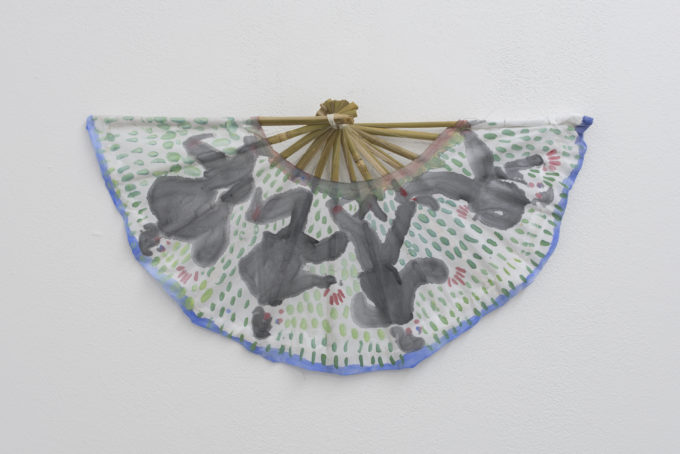 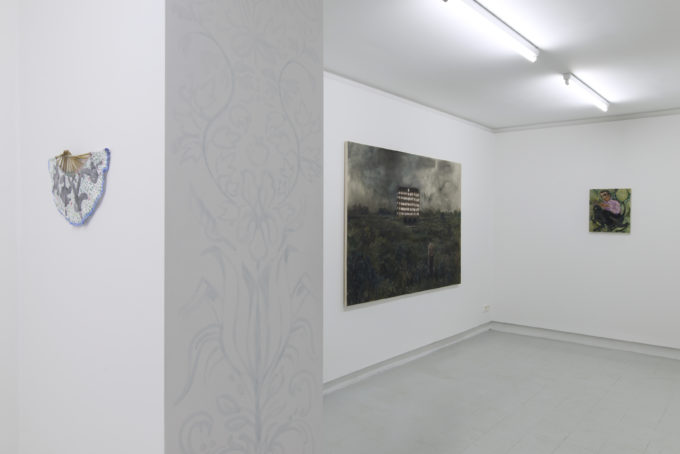 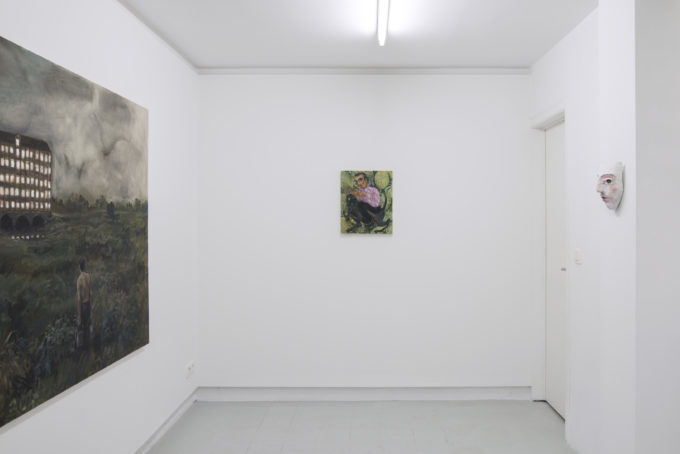 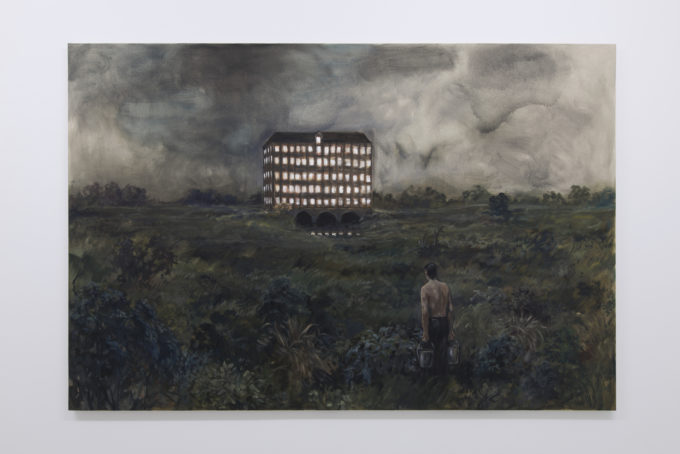 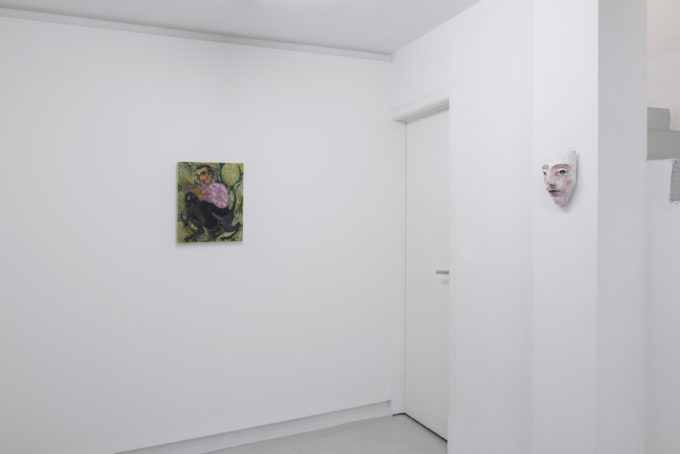 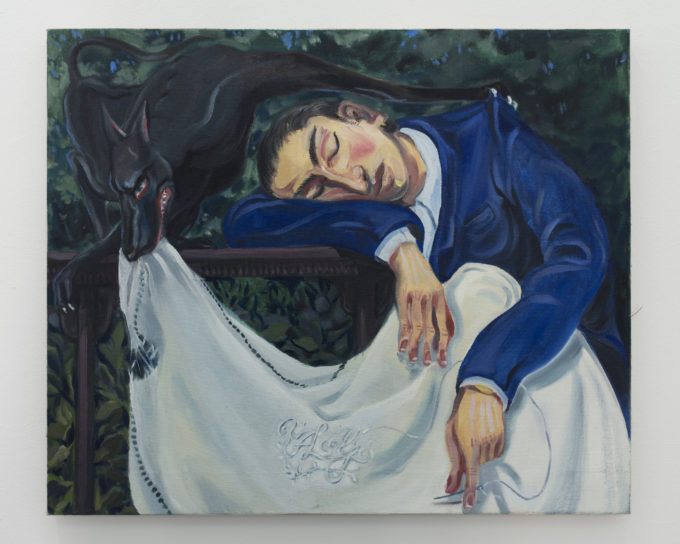 For his first personal exhibition at Super Dakota, Adrian Geller composed a poetic universe inhabited by suited men, wild vegetation, and creatures. Using several mediums such as painting, watercolors, textile, installation, video and sculpture, the young Swiss artist presents a hyperbolic world full of contradictions and allegories. Throughout the exhibition Adrian questions the basis of our existence through various narratives such as social constructs, environment, capitalism, and labor.

Populated by recurring male characters confronted to their most primitive instincts, Adrian Geller’s paintings make use of symbols to depict an oasis within a complex and ancient bond. Figures of the dog, goat or sheep, which have had different connotations throughout Art History, are a constant reminder of our wildness. On the other hand, the suited men unmistakably represent the archetype of labor, and more specifically the concrete servitude to the corporate world. These businessmen appear to be consumed by hoarding and monetizing while manifesting a feeling of melancholy. They are torn between their personal quests and their external social appearances, uncapable of fully exploring their innate impulses nor giving up the comfort brought by a socially acceptable lifestyle. The interaction between these characters, the man and his alter egos, is at times ambiguous and includes all scopes of a complex relationship: violence, tenderness, companionship, desire…

The practice of embroidering is a recurring feature in the artist’s work – either embedded in the paintings or materialized on his textile pieces – and it is linked to an act of patience and contemplation. The idea of creating something with one’s own hands symbolizes a return to a simpler time when our relation to nature was different, when objects were created at a slower pace. This approach is also implemented in the sculptural works featured in the show. In “Building Highrises (the Fraud)” (2020), a tower of hand painted cigarettes made of wood, the mechanically mass-produced object becomes a handcrafted structure. Its architecture recalls the one of office skyscrapers, where cigarette breaks punctuate a working day. This brings us once again to the theories of labor and capitalism, as well as the social contract this system relies on.

At the core of Adrian’s investigations, nature itself is represented as both enchanting and menacing. Its uncontrollable power, unpredictability, and cataclysmic extremes contrast with the sensuality of its smells, its rich textures and bright colors. The protagonists are lost in the im- mensity of their strengths, as they grasp the remains of a comprehensible world, following ghost lights and then led astray into the marsh.

Another dichotomy can be found in the treatment of the paintings. Adrian’s masterful technique allows him to create a language of his own nourished of Realism, Post-Impressionism, and a more Naïve style. Asked about his influences Adrian spontaneously cites painters such as Paolo Uccello, Arnold Böcklin, Eugene Delacroix, Gustave Courbet, Franz Marc or Henri Rousseau; writers Robert Walser and Àron Tamàsi as well as the 2018 film from Alice Rohrwacher: “Lazzaro Felice”. His thoughtful use of this hybrid aesthetic heightens the complexity of a common and intricate system of relationships. As viewers we are confronted with our own vulnerability through the tormented visions of a young man scrambling to find beauty in our modern world.

Adrian Geller’s paintings trace back to the contemplation of the Goethean heroes, gypsies or oriental artisans, travelling to unearth their own peace and serenity through wild and dramatic landscapes, and in the process uncovering reality’s detachment from nature thus becoming unnatural.

The relevance and accuracy of Geller’s recreated world resides in his questioning and re-imagining of a symbiotic bond between humans and nature. At a time when environmental and sociological crises have unpredictable impacts on our collective experience, and life in general, “Idle Hands are the Devil’s Workshop” unveils our very own condition and leaves us gazing at the world in disbelief.

Adrian Geller, born in 1997 in Basel, works and lives in Paris, France. He studied illustration at the atelier Angoulême, France, and he is currently enrolled in his fourth year at the Beaux-Arts de Paris. Recent exhibitions include Villa Noailles, in Hyères, Chez Valentin, in Paris, Stone Oven House, in Turin…